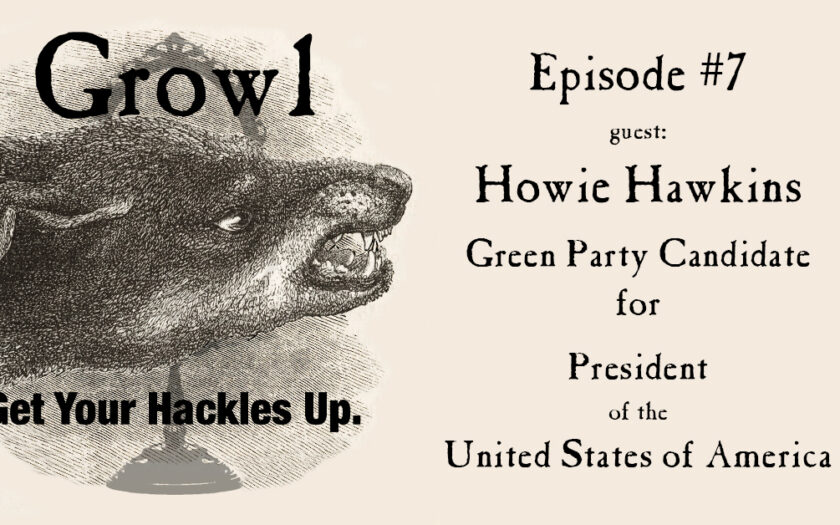 the mongrel speaks with Howie Hawkins, Green Party candidate for President of the United States of America. (website)

Hey, listener. The mongrel, a.k.a. Jay V. here. If you support the music, news, and commentary that you hear on Radio Free Berkshires, and read in the Greylock Glass, I want you to know that we are so grateful. Your generosity is what keeps this independent media pirate ship sailing. If you aren’t a contributor yet, be one of the first to set up a monthly contribution at our new support page at Patreon.com/greylockglass, or right on our website at greylockglass.com/membership. The thing is, no matte what happens after election day, fearless journalism is only going to become more and more important. Help us bring it to you. And thanks.

Big D–Democrats are locked up in twisted love triangle. The Democratic voter gets a peck on the cheek once, maybe twice, during a presidential administration fronted by their boy. And for that little bit of liberal affection, they’re supposed to overlook dodgy elections practices, generational ineptitude, and torrid transactional relationships with the very businesses responsible for exactly the human and environmental crises these voters say they care about in poll after poll.

When they get caught trying to sneak in at sunrise, smelling like motel soap, instead of evincing the appropriate hang-dog contrition, they blow up in a rage. Go vote for the other guy if you don’t like it! You think you’re abused now? You just wait and see what happens if you even consider leaving!

And that’s where we are. The DNC refuses to include any meaningful platform planks that would provide the relief that a majority of their base supports. No Medicare for All. No Green New Deal. No realistic minimum wage. No sensible subsidy for college education. In other words NOTHING that every other developed  Western nation has decided government has an obligation to provide.

We have, in Joe Biden a presidential candidate who, on multiple occasions, has told voters with earnest concerns that they should go vote for Donald Trump. A would-be abuser in chief with a decades long history of lying, unsavory relationships with banking and business, demonstrated racism, creepy behavior, and a hot temper that’s somehow both impotent and disturbing at the same time.

Biden isn’t an “imperfect candidate.” He isn’t even just a “flawed human being.” He’s a dumpster fire straddling a double set of train tracks at a crossing with a busted bell and flasher. He was born to lose this election. In a double digit disgrace. And if he does, the DNC still isn’t going to show up at the doorstep with it’s hat in one hand and some daisies in the other. No. It’s going to lash out and give its progressive wing a shiner that will spread across the entire left side of its face.

“You didn’t work hard enough to get out the vote,” they’ll say. And then, of course, simple arithmetic and electoral college reality be damned, they’ll point the finger at their preferred, ready-made enemy who will be forced to wear a scarlet letter for four years, the third party voter.

Make no mistake, Donald Trump must be defeated this election in a fashion that is way, way beyond question. Beyond even the suspicions of all but the most rabid MAGA trogs. While it can be argued that the greedy and seedy dealings of Democratic power players are leading the planet and the human race slowly to disaster, the GOP seems hell-bent on setting the controls for the heart of Armageddon and pushing the big red, candy-like, hyperdrive button. Given the evangelical death-cult flank of the Republican electorate, reservations for the big A Apocalypse might actually be part of the GOP platform — the part written with invisible blood ink.

So, yeah, if you look up the word, “existential” you’ll just see the date November 3rd, 2020. And yeah, Trump must be denied a second term, or the nation risks tearing apart at the seams. But even if Biden gets sworn in next January, a four year old elephant is still crashing around in the room. Since May of 2016, what has become crystal clear is that the Democratic Party is no place any self-respecting progressive should remain. The DNC annexed the coherent, less froth-at-the-mouth portion of the Grand Ol’ Party of the 1990s and has been become increasingly inhospitable to anyone looking for fundamental change in climate policy, income inequality, systemic racism, financial regulation, or the many other areas suffering social decay and institutional erosion.

Biden said as much to a room full of power brokers when he assured them “nothing will fundamentally change.”

And so, after a coalition of center and left voters defeat Trump — and it really would be the voters who beat him if they can, in spite of the Biden campaign’s incompetence — after the voters defeat Trump, it will be time for “Exit, stage left, “ Bugs Bunny –style. Progressives need to say goodbye to the Big D Democrats once and for all and do the unthinkable — throw their support fully behind the one national party that has the infrastructure and the experience to, at least, to make its voice heard occasionally above the two-party professional wrestling match. I’m talking, of course, about the Green Party.

Centrist, corporate Dems tend to hate the Greens more than they do the Republicans. Their visceral reaction to the names Ralph Nader and Jill Stein provide the emotional clues as to why. Both are considered spoilers, despite ample mathematical evidence to the contrary as to why the Democrats lost in 2000 and 2016 respectively. But the more deeply seated self interested reason that the Dems would rather play ball with Republicans is that the two share class interests welded into the architecture of education, health care, law enforcement, real estate, commerce, and government at every level. Both sides simply have too much to lose to allow even modest progressive change to take hold. People might experience what it feels like not to have the capitalist Jack boot on their necks for awhile and decide they like it.

DNC leaders, who don’t want to come right out and say they’re actively against greater societal parity, have to laugh off the people’s grievances and say that these leveling measures might be nice, but it’s like a kid asking for a pony for his birthday.

In fact, in her 2017 memoir, “How I Had Nothing to Offer America, and yet Am Still Surprised at How Little Voter Enthusiasm I Created,” Hillary Clinton smugly quotes the Facebook post by Helen Stickler that Sen. Bernie Sanders’ vision of a more just society was akin to giving the U.S. a great big, unaffordable pretty pony. (Still, remember all the other Western Democracies?)

And, despite Clinton’s bruising loss, which she blames on pretty much everyone but herself, the message that American’s are ready to start diverting more of the federal budget away from war spending and towards health and human services has been utterly lost on the Biden campaign. Creepy uncle Joe vows to veto Medicare for All, even if it gets through the House and Republican-controlled Senate. The only presidential candidate in recent memory to be so gobsmackingly out of touch with the concerns of the voters was probably George H. W. Bush. And it took years for him to live down the “It’s the economy, stupid,” catchphrase that defined his epic loss to Bill Clinton in 1992.

Unfortunately, it’s too late in the day to hope for a Biden loss that will teach the DNC the lesson that “it’s healthcare, stupid.” Too much of everything else would burn to the ground while the Dems were busy blaming Bernie, The Green Party, the Russians, Julian Assange, and hell, probably Radio Free Berkshires before they’re done.

Progressives do have the opportunity to do more than just send a message this November, however. Despite aggressive, desperate, and questionable tactics by Dem committees in several states including Montana, Pennsylvania, and Wisconsin to have the Green Party candidates purged from the ballots, Green candidate for President, Howie Hawkins, is running an extremely energetic campaign. His platform? Oh, most of the stuff that most Democrats say that want. And here’s the thing, see — if you happen to live in a state that is nearly guaranteed to hand Joe Biden your electoral votes, you can vote for any candidate without jeopardizing the outcome of the election. And if enough people in blue states around the country vote for Hawkins, for example, he could very possibly earn five percent of the popular vote, which would qualify the Green Party for matching campaign funds in the next election.Those states that are most likely to vote blue no matter who are California, Washington, Minnesota, Michigan, Michigan, New York, Massachusetts, New Jersey, Maryland, and possibly some other Northeastern states.

What would a viable Green Party mean for progressive politics? While it might not mean we’ll see a green White House or Congressional majority right away, it would almost certainly mean that the DNC would be forced to accept a coalition with the Left and negotiate on platforms in order for their candidates to win the backing of the Green Party. In other words, ratchet up progress on environmental and social issues to a level well beyond the incrementalism that’s been the hallmark of the the neoliberal center for  more than three decades.

I had the good fortune to speak with Howie Hawkins at length, earlier in his campaign, before he’d named Angela Walker as his running mate. And while I’m bummed about not being able to include her perspectives in this program, with luck, she’ll accept an invitation to speak with Growl soon. In the meantime, I hope you enjoy this full length conversation with Howie Hawkins, Green Party candidate for President of the United States of America.