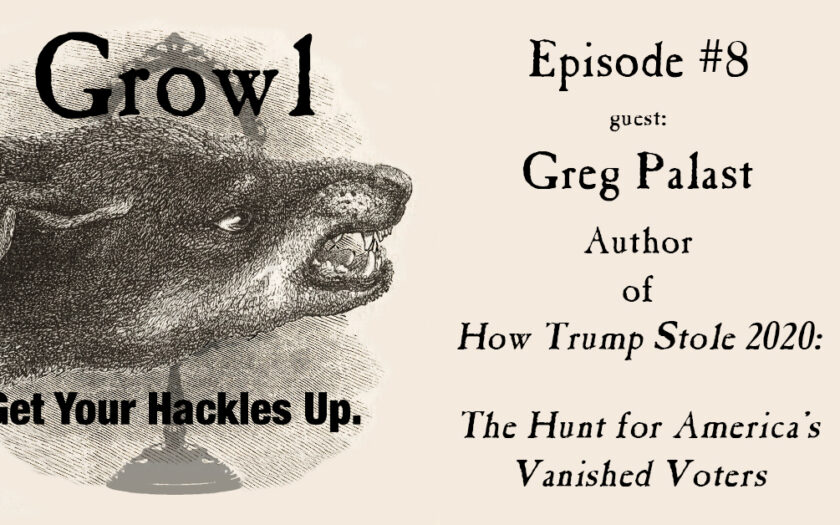 How Trump Stole 2020: The Hunt for America’s Vanished Voters

(Amazon affiliate link: we make a tiny commission if you purchase through this link—your price is not affected.)

Hey, listener. The mongrel, a.k.a. Jay V. here. We want Radio Free Berkshires and the Greylock Glass to be 100 percent supported by underwriters and listeners just like you, and we’re so close. If you’ve already contributed, I hope you know that we are so grateful. If you aren’t a contributor yet, please…give through our new support page at Patreon.com/greylockglass, or right on our website at greylockglass.com/membership. No matter what happens after election day, fearless journalism is only going to become more to you, your family, and your community. Help us bring it to you. And thanks.

We’ve had so many last straws. What was your first last straw. Was it the kids in cages? Was it the tossing of paper towels to hurricane ravaged Puerto Ricans? The shit-countries comment is right up there for me. The entire encyclopedia of environmental regulation rollbacks is definitely a contender/ But maybe the real last straws were placed even before he became president. Maybe it was the pussy-grab tape or the “In another 10 years, I’m going to be dating her boast about an eight year old girl.

I thought my absolute last fucking straw moment with the Trump administration came when that miserable prick signaled to white supremacists to “stand by” during the first debate. But then he went and cancelled negotiations with the Democrats to get another round of stimulus through Congress before the elections, and well, it’s hard to fight fascists with an empty stomach, so here I am, camel-humping yet another straw, waiting for goddamn back to break once and for all.

Let’s face it, with all the animus most rational Americans have built up against Donald Trump, we don’t him to pull any the-election-was-a-fraud, you-can’t-make-me-leave funny business NOT because we’re afraid to throw down with a tyrant, No. We just want him, after he gets his ass handed to him on November 3rd, to just go the fuck away. Go back to Mar a Lago and wait for the indictments to start raining down like frogs.

The American Left doesn’t want to go toe-to-to with a dictator, because even after we leave his ass on Saint Helena, we STILL have a long slog ahead of us, dragging Joe Biden into the 21st Century and convincing him to get on board with the policies a majority of supporters have said they want.

I don’t mean to sound too flip about sending Trump packing. Despite what the polls say, a lot of us on the left are pretty anxious that a clear-cut Biden victory next month is far, far from assured. Remember, Trump doesn’t have to enact martial law if the votes just aren’t there for the Biden/Harris show. One way that could happen is if people in key states simply don’t turn out for Dems, à la 2016. The other way is if sneaky, sneaky operatives with the ability to monkey-wrench the machinery of the elections make sure that the voters themselves are simply disappeared off the rolls so that they can’t pull a level even if they do show up at the polls.

This possibility isn’t hypothetical. It’s happened before, with devastating consequences, and it can happen again. Just ask Greg Palast, author of How Trump Stole 2020. He’s been working the voter disenfranchisement beat for more than 20 years.

John Nichols, of  The Nation, calls him “The planet’s most tenacious investigative reporter.”

Chris Hedges says, “Palast is one our great investigative reporters. If you are not outraged by what Palast has uncovered, you have no heart. A searing indictment of a rigged electoral system.”

Greg Palast is known for his investigative reports for BBC, ​The Guardian​ and ​Rolling Stone​. He is the author of numerous books, including ​Armed Madhouse​ and ​Billionaires & Ballot Bandits. ​ His 2002 bestseller ​The Best Democracy Money Can Buy​ covered in detail the fiasco of President Bush’s victory in Florida in 2000 and served as the basis for his documentary film ​Bush Family Fortunes​.

Before turning to journalism, Palast for 25 years was an expert investigator who directed some of America’s biggest racketeering and fraud cases for 26 attorneys general, the US Justice Department, and advisor to several governments worldwide and author of the United Nations guide to corporate regulation. His investigations have become instrumental in exposing historic controversies including the Shoreham Nuclear Power Station Project, Exxon Valdez, the 2000 U.S. Presidential Election, and Deepwater Horizon.

He wrote the “Inside Corporate America” column for ​The Guardian​ and his articles have appeared in magazines and journals including ​Salon​, ​Harper’s​, and the Washington Post.​ Greg currently lives in Los Angeles. To learn more, visit: ​ gregpalast.com​.

In How Trump Stole 2020: The Hunt For America’s Vanished Voters, Palast’s investigation exposes numerous cases of voter suppression and manipulation. In the 2016 election, over 5.8 million ballots nationwide were cast but never counted for their intended candidate. In Detroit alone, 75,355 ballots were never counted due to broken voter machines.  President Trump won Michigan by only 10,700 votes.

Palast’s exhaustive investigation over the last 4 years also exposes the 1.9 million legal voters, the majority in minority communities, who were denied their right to vote upon arrival at their polling station. His investigation further reveals that one in five (22%) mail-in ballots are ​never counted​ —a fate that befalls Hispanic voters 300% more often than white voters. In the 2018 mid-term election for Georgia’s governor in the race between Stacey Abrams (D) and Brian Kemp (R), Republican voting officials quietly removed half a million voters from voter rolls.

This is Palast’s 20​th ​year on the racial vote suppression beat. Reporting for ​the Guardian​ (and later BBC TV and ​Rolling Stone​), he busted Katherine Harris’ illegal removal of thousands of Black “felons”—all of whom were innocent—from Florida’s voter rolls in 2000. Palast’s substantial academic credentials in economics and statistics include having lectured at Cambridge, Oxford, Trinity and recently led a seminar on racial vote suppression at Harvard at the request of Black Voters Matter. Greg Palast’s investigative team has been hired by Stacey Abrams’ organization Fair Fight to provide the expert analysis of the 16.7 ​million​ voters purged from the nation’s voter rolls in the last two years.

How Trump Stole 2020 ​ includes a forty-eight-page comic book by one of America’s most informed political commentators—and perhaps the only one who is also a top illustrator—Pulitzer Prize–nominated Ted Rall, author of ​Snowden ​ and ​Bernie, among other books.

So, with all that background now in the background, here’s the Growl interview with Greg Palast.